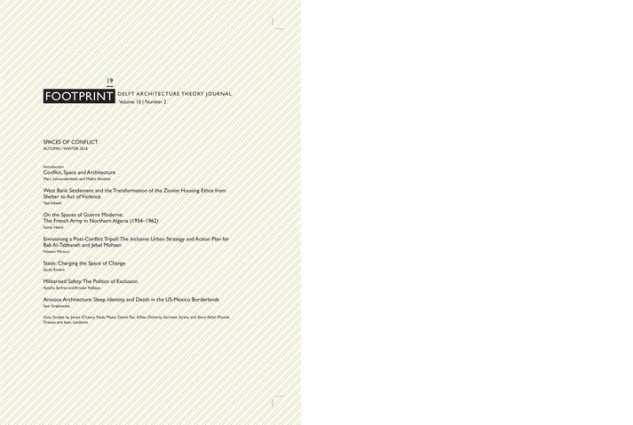 The terrorist attacks at the start of the 21st century catapulted the issue of space and conflict into the forefront of architectural debates. As a result, existing and newly emerging national, religious and ethnic conflicts in relation to urban space became the focus of attention in architecture. Though military thinking had already had a long-standing tradition in architectural history, the sudden emergence of new spaces of conflict considerably altered architectural discourse. Extreme conditions of war, militarisation, climate change as well as economic crisis are threatening to structurally reconfigure our living environments. Over a decade later, however, the aftermath of these urban intrusions seems to have produced a diversified field of both thinking and action in architecture, as the theorising of spatial conflicts has started to incorporate a wide variety of reflections from other disciplines while architectural practices have shown a remarkable adequacy in addressing spaces of conflict, crisis and disaster.

The forthcoming 19th issue of Footprint will focus on these more recent roles of architecture in the contemporary spaces of conflict. In this issue, departing from a spatial understanding of geopolitical, climatological and economical conflicts, we seek to introduce and add to the professional discourse new conditions, spaces and experimental practices. Focusing on 'conflict', we are interested in contributions that highlight the large scale and phenomenal transitions in the physical world and in society by extrapolating, through examples, the abundance of relations that can be traced between conflict, territory and architecture.