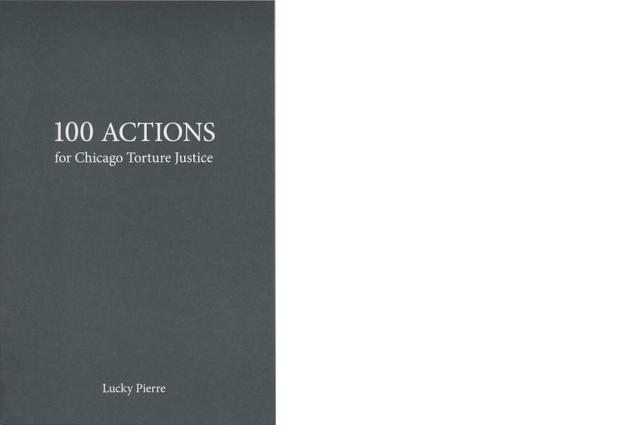 This booklet is part of Lucky Pierre's contribution to The Chicago Torture Justice Memorials Project. That project describes itself as follows:

"The Chicago Torture Justice Memorials Project invites artists and justice seekers to submit proposals for a speculative monument to memorialize the Chicago police torture cases. Our goal is to honor the survivors of torture, their family members and the African American communities affected by the torture. The monument will also recall and honor the nearly two-decades long struggle for justice waged by torture survivors and their families, attorneys, community organizers, and people from every neighborhood and walk of life in Chicago."

Lucky Pierre took one of the darkest chapters in Chicago's history - there were over 110 victims, all African American men, tortured by John Burge and others in the Chicago Police Department - and turned these atrocities into a list of actions that is constantly shifting its tone and energy: poignant and moving, furiously angry, solemn, poetic, abstract or at least a little mysterious, and even darkly comical. The booklet includes the first 100 actions written by the group. The project is also a call for participation and welcomes the reader to submit additional actions.