A Disturbance of Memory 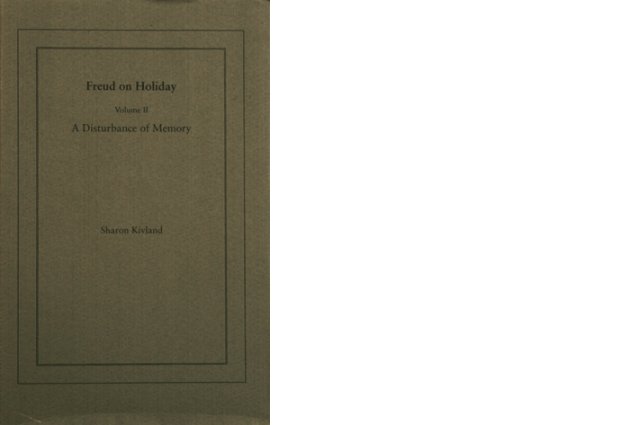 A Disturbance of Memory is the second volume in Sharon Kivland’s trilogy, Freud On Holiday; a series of experimental travel writings in which she re-imagines journeys made (and sometimes dreamt) by Sigmund Freud to European sites of archaeological importance.
Once a year Freud would go on holiday with his brother, Alexander. Using Freud’s published works and archives, Kivland has diligently established the routes and itineraries of three such holidays, and pieced together all the other historical traces of Freud’s thoughts and reactions during and surrounding each of those holidays and the experiences they involved. Each book in her series documents Kivland’s experiences as she re-takes one of the same holidays, in the twenty-first century, with her sister. Through writings, photographs, drawings, postcards and other fragments Kivland assembles books that work between traditional genres to produce a new kind of para-scholarly performance. Volume II documents the sisters’ adventures as they follow Freud and his brother to Trieste and Athens, and are frequently diverted by the traces of others, including James Joyce, Jacques Derrida, Italo Svevo, and Ulysses.
In Trieste in 1904 the brothers determined to go to Corfu but were told by their host that it would be too hot and that they should go to Athens instead. Any change of plan seemed impractical to Freud, but they succeeded in booking tickets and took the trip to Athens. When Freud arrived in Athens and stood on the Acropolis he found himself surprised to be thinking: ‘So all this really does exist, just as we learnt at school!’ His surprise was twofold: firstly , that something unbelievable exists, and secondly, that its existence should have been in doubt. Such is the cue that A Disturbance of Memory takes up.
Kivland’s project is contextualised by an Introductory essay by American literary theorist, Craig Saper, and the English language first half of the book is followed by a full Greek translation.