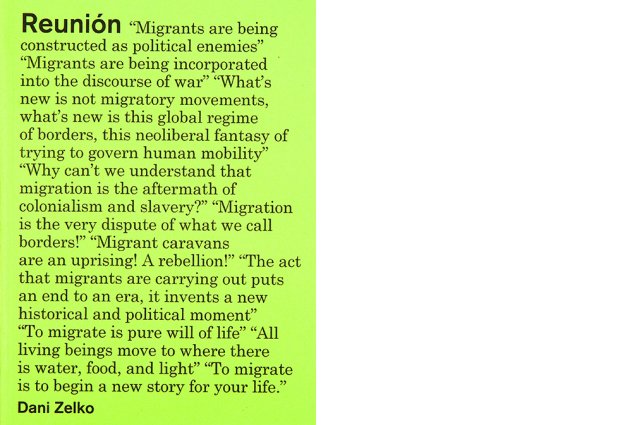 Reunion are various acts that involve conversing, reading and writing; quotidian yet strange acts that always implicate being next to one another. Zelko writes down poems that others dictate to him. After completing his homework of how to listen and how to write, he edits the books within the next coming days. In a round of nine people, the writings are presented to the author’s neighbors, friends, and family. The writer reads his poems; he listens to himself while he is being heard by others.

The second part of the project consists of an extension of the first project, in other places. In a round of nine chairs, the writer’s poems are read by spokespeople, emissaries who lend their bodies, eyes and voices. It is a chain of situations and encounters: subjects dictating and reading, reading and writing; books and poems. All these are actions and proceedings in order to be together.


This edition, titled North Border, was realized between September 2017 and October 2018, taking place in Mexico, USA, and Canada (Tijuana, Veracruz, Texas, Florida, New York, Princeton and Toronto). The cover’s photograph was taken just before the presentation of Maritza’s book. Maritza read her poems aloud to her caravan friends. Then they gave away some books to people who passed by, and walked to the USA in order to seek political asylum.