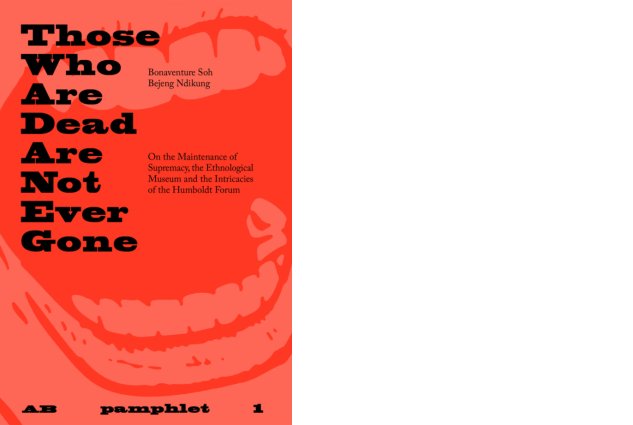 On the Maintenance of Supremacy, the Ethnological Museum and the Intricacies of the Humboldt Forum.

The institution of the ethnological museum or world museum seems to be in the midst of a serious crisis of choking. The delicacies that most of these museums have acquired, which is to say co-opted, which is to say ingested, seem to have collectively missed the track to the oesophagus and got stuck in the respiratory tract. They have been stuck there for as long as the history of mass collections, acquisitions and looting, for as long as the ruthless and ongoing extraction of cultural property has occurred in the former colonies outside of Europe.

A twelve-act essay on the maintenance of supremacy, the ethnological Museum and the intricacies of the Humboldt Forum.

Bonaventure Soh Bejeng Ndikung was born in 1977 in Yaoundé, Cameroon. He is an independent art curator, art critic, author and biotechnologist. He is founder and artistic director of SAVVY Contemporary Berlin and editor-in-chief of SAVVY Journal for critical texts on contemporary African art. He was associate professor at Muthesius University Kiel, and is currently guest professor in curatorial studies at the Städelschule in Frankfurt. He was curator-at-large for documenta 14, and was a guest curator of the 2018 Dak’Art Biennale in Senegal.

Also available in German and French.