On Labour and its Sonic Ecologies Catalogue
New 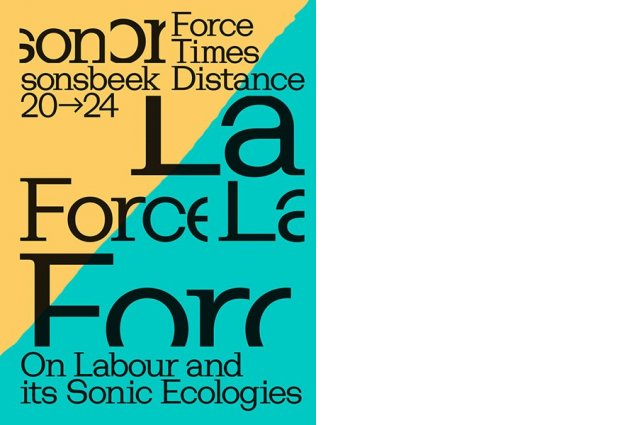 Amidst everything that has and is still going on, what is silenced and what reverberates? What is revealed and what is ignored? Is solidarity resonating? Do we perceive its echoes while some people keep being denied breath? The curatorial framework of sonsbeek20→24, centered around labour and its sonicities, connects a millenary history crossing times and geographies to the present moment, through a multitude of voices, sounds, and ripples. It invites us to listen to the sounds relegated to the “edges” of the “main” motive, to the whispered stories, to those passed through singing and through storytelling, and embodied narratives. An edition that inhabits the absence from the dominant image. An edition that draws particular attention to that which has been written otherwise — in singing, playing, performing, dancing, caring, in polyphonic rhythms and multiple motherless-tongues thanks to which memories, traditions, spiritualities, entire cosmologies crossed oceans and deserts. This edition aims to reveal the complex labour relations and inequalities that show who is (un)seen, who is (in)dispensable, who is seemingly worth our applause, and who is fawningly silent.

This 12th edition of sonsbeek — the pathbreaking quadrennial for art in public space, is co-curated by Antonia Alampi, Amal Alhaag, Zippora Elders and Aude Christel Mgba, curatorial support by Krista Jantowski, under the artistic direction of Bonaventure Soh Bejeng Ndikung. Force Times Distance – On Labour and its Sonic Ecologies is a journey, to say the least, into the unknown. A journey marked by a plethora of uncertainties, which we have chosen to embrace rather than fend off or deflect. From a global pandemic, to financial precarity, to arduous labour conditions, we consider the becoming of sonsbeek a wandering in wondering, trusting not only in our interlocutors — artists, curators, managers, audiences, producers etc — but more especially trusting on the agency of the project and what it wants to reveal through us.