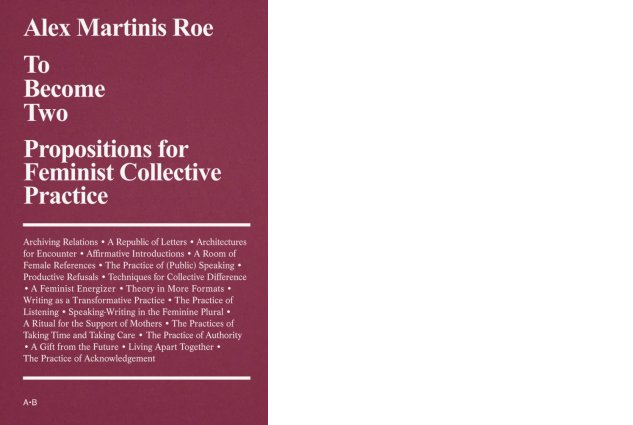 To Become Two: Propositions for Feminist Collective Practice offers a narrative of artist Alex Martinis Roe’s research into a genealogy of feminist political practices in Europe and Australia from the seventies until today. These practices include those of the Milan Women’s Bookstore co-operative; Psychanalyse et Politique, Paris; Gender Studies (formerly Women’s Studies) at Utrecht University; a network in Sydney including people involved in the Sydney Filmmakers Co-operative, Feminist Film Workers, Working Papers Collective, and the Department of General Philosophy at Sydney University; and Duoda – Women’s Research Centre and Ca la Dona, a women’s documentation centre and encounter space in Barcelona. Drawing from their practices and experiences, Martinis Roe’s research forms a proposal for a transgenerational approach to feminist politics. This is further developed as a practical handbook of twenty new propositions for feminist collective practice, which were formed in collaboration with a network of contributors through experiments with these historical practices.

Alex Martinis Roe is an artist and researcher. She is a former fellow of the Graduate School at the University of the Arts Berlin, and holds a PhD from Monash University, Australia. She is currently completing her project To Become Two: a series of films, workshops, public events and a book, as a social history of the feminist practices which invented the concept of ‘sexual difference’, and collective experiments with this research through the sub-project Our Future Network.