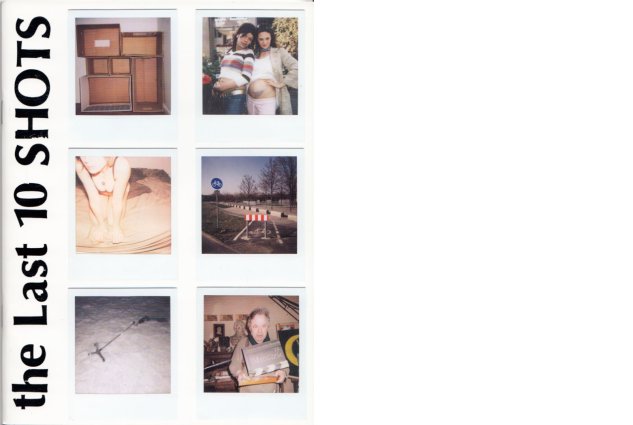 The American company Polaroid recently announced its decision to stop the production of its famous instant cameras and films. We are all familiar with the unique noise (gzzzzzzzklok), the waiting time and the joy of seeing, as if by magic, an image appearing on the instantly identifiable format: 7,7 x 7,7 cm. More often than not blurred, the subject partially or wholly out of shot, too bright or underexposed... disappointement was often as big a part of the game as anything else. The advent of the digital camera era has rendered this adventure obsolete. Sooner or later, the Polaroid will become 'history', an highly collectible and instantly recognizable relic from the analog times. Without nostalgia, we have provided 28 artists with a 600 cartridge containing 10 colour shots and asked them to shoot their last ever Polaroids. An architectural photographer, a pornographic one, a conceptual artist, a specialist in self portraits, a painter, and so forth. All were given the same deal: Here's the film, just give us the results! Even if only one photo satisfies you. Even if it's blurred. Even if it just looks like a Polaroid..." Featuring works by Asia Argento, Thomas Bruns, Michael J. Demeo, Damien Deroubaix, Rabea Eipperle, Heike Gallmeier, G.R.A.M., Annika von Hausswolff, Jason Forrest, Jürgen Grosse, Adam Johnson, Richard Kern, Harmony Korine, Les Krims, Natacha Merritt, Stephen O'Malley, Bruno S., Danny Sangra, Zoe Thorne, Jean-Luc Verna, Eileen Wunderlich, Miron Zownir.