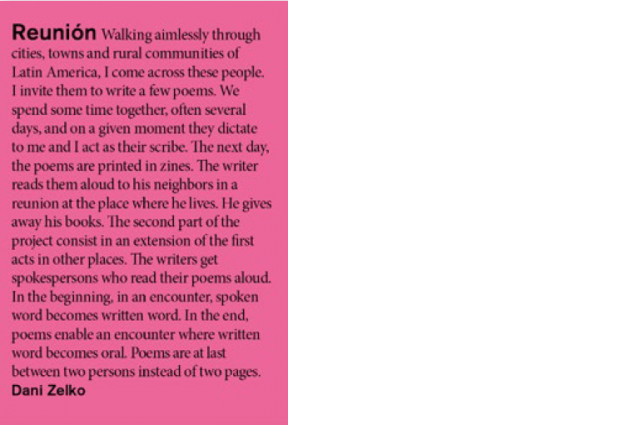 Reunión is composed of various acts that involve conversation, reading and writing: daily actions —though at the same time out of the ordinary— that always involve being face to face. Dani Zelko writes down poems that others dictate to him. They dictate to him as the conversation develops and then finally ceases. After fulfilling his task as a listener and copyist, he edits and prints the books the following day. The books are presented to neighbors, family and friends of the writer in a circle of nine people. The writer reads his poems out loud, he listens to himself and the others hear him for the first time. The second part of the project consists of an extension of the first acts in other places. Writers’ poems are read out loud by spokespersons, emissaries and people who lend their body, eyes and voice to read in a round of nine chairs the poems of people who are absent. A chain of actions, subjects dictating and reading, a scribe and a listener, spokesmen and listeners, books and poems. Actions and procedures for being with others.