Emma Bolland // The Desire for Haiku 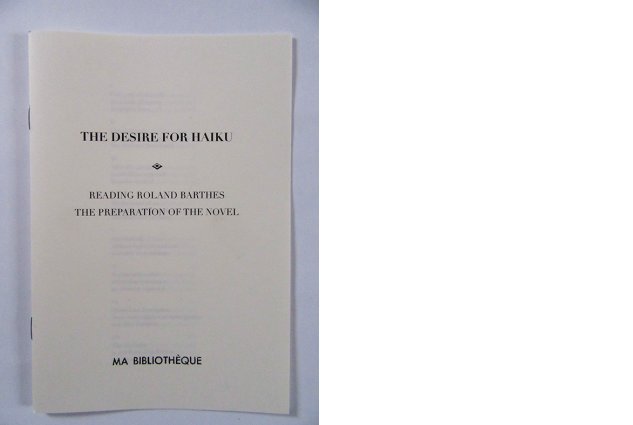 For two years we have been reading The Preparation of the Novel by Roland Barthes, the collection of the series of lectures he gave at the Collège de France between 1978 and 1980, completed shortly before his death in 1981. He declared his intention to write a novel, and in this pedagogical experiment, explores the trial of novel writing. This year we are reading his lectures on his favourite literary form, the haiku, a poem of seventeen syllables in three lines of five, seven, five, usually containing a seasonal reference. He confronts the problem of how to pass from Notation (of the Present), 'a short fragmented form', to the Novel, 'a long continuous form'. For Barthes, the haiku is an 'exemplary form of the Notatin of the Present', 'a minimal act of enunciation' that 'notes [...] a tiny element of "real", present, concomitant life'. These haikus are Barthes's haikus, or rather, these haikus are constructed only of his words, extracted from the chapter entitled 'The Desire for Haiku', one from (or even for) each page. It is an experiment in writing, if not a search for a form (for that is given), drawn from our more or less monthly meetings during the academic year around a table to talk about writing, the trial of writing, one that may how the rhythm of our reading.